In a small and mountainous village in north China, seniors parade across the village three times a day to a canteen set up by the local authorities. Minutes before mealtime, the silver-haired locals leave their houses, some using walking sticks, and some linking arms. In no rush, they stroll to a large courtyard near the village’s entrance.

The canteen in the courtyard, which offers free meals to seniors in the village, was initiated in 2014, and run with financial aid from the government of Zuoquan County in Shanxi Province, where the village is located. It is part of the services on offer at the village’s care center for seniors. 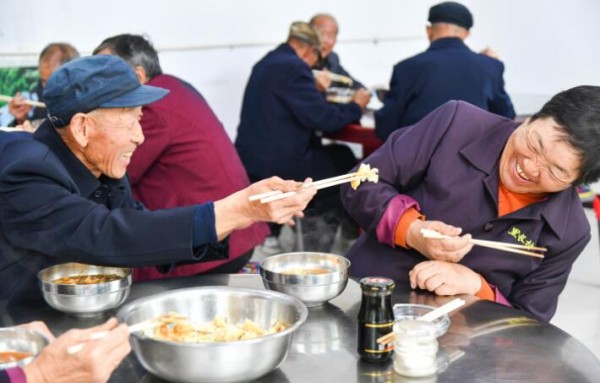 A resident tries to feed his wife, who is a bit camera shy, at a canteen for senior locals in Lichang Village of Zuoquan County, Shanxi Province, on September 18. The canteen offers free meals to villagers aged 65 and above (WEI YAO)

The seniors all wear dark jackets in similar style, with the name of the village—Lichang Village—embroidered on the top left. Like so many others in China, the village too, has seen its young population migrating to the cities in pursuit of better employment opportunities. Only the children and seniors stay put.

The village doesn’t have a school, so children have to go to class elsewhere. Most of the time, this village is quiet, very quiet. But once this senior group steps out of home, it becomes animated.

They all walk directly into one room in the courtyard and sit around six large round tables. Each senior is assigned a seat number. “If you let them sit wherever they want, some people might feel left out,” Song Xianglin, the village head who manages the canteen’s daily operation, told Beijing Review.

Shortly after they take their assigned seats, the chef, a 65-year-old man who has been working at the canteen for five years, and the assistant chef, a 54-year-old woman working there for three years, serve up the food.

To tease the taste buds, the chef cooks up different menu every day. Wheat products are the main local staple. Noodles frequently appear on the table. Other favorites also include savory pancakes, steamed buns, dumplings and stewed vegetables with meat.

“The 64 seniors in the village are frequent ‘customers’ of this canteen,” Song said. “When we first opened the doors in 2014, we saw no more than 20 seniors coming in every day. That number is rising.”

The 46-year-old Song is a village local. When he left his hometown to carve out a better life for himself outside in his 20s, the village was deeply impoverished. He started his own business which was doing quite well when he was asked whether he would consider returning to the village and help it find a way out of absolute poverty.

He said yes. This was 2005 and Song was 29. Song established several businesses after returning to the village. He used his own money to set up different undertakings in the village, such as planting fruit trees and establishing a photovoltaic power station.

“The aging of China’s rural areas has created some issues,” he said. “As their children are usually not by their side, taking care of this group is a major concern for both the government and family members.”

Song explained that among the nearly 400 villagers, about 100 are seniors aged 60 and above. Those above 65 are eligible to dine in the canteen. With a range of physical problems, many of them do not want to cook at home on their own. They like to eat in the canteen and applaud its services.

The canteen, offering hot meals, has made a few changes to this group’s schedule. Breakfast is served at 7 a.m., lunch at noon sharp and dinner at 7 p.m. The food is free and warm and it is also a chance to get out of home for a little “workout” three times a day.

“These seniors are very different from one another,” Song said. “They have a healthy appetite and they love to chat and laugh.” A couple working as gatekeepers at a factory near the village drive their pickup to the courtyard’s entrance every day and allow themselves 10 minutes per meal, from the first bite to last swallow. “It’s like they have some kind of military discipline,” the other diners mockingly say.

After their meal, they can go into another room to play poker or chess.

It’s been 17 years since Song was asked to come work for the village; his earlier “yes” turned out to be a lifelong career. He lives in the village and spends long hours at the caring center. Old people who have difficulties taking care of themselves can even live at the center.

A man with hearing and speaking disabilities passed away earlier this year at the care center at the age of 93. This man had resided there for several years. “It was sad to see him leave,” Song said. “The number of seniors aged 65 and above has kept increasing over the past years and is expected to go up again in the following years.”

On September 20, Wang Haidong, Director of the National Health Commission’s Department of Aging and Health, stated during a press conference that China’s elderly population is likely to top 300 million by 2025 and 400 million by 2035.

The size of China’s senior population and its proportion in the total population are predicted to peak around 2050, posing huge challenges to the provision of public services and to the national social security network.

“The situation is more severe in the rural areas,” Song said. “We need to explore more ways to look after this group, and not only deal with their physical issues, but also take care of their mental health. We will all grow old anyway.”