The report “Electric Aircraft Market by PLatform (Regional Transport Aircraft, Business Jets, Light & Ultralight Aircraft), Type, System (Batteries, Electric Motors, Aerostructures, Avionics, Software), Technology, Application, and Region – Forecast to 2030″, is estimated to be USD 7.9 billion in 2021 and is projected to reach USD 27.7 billion by 2030, at a CAGR of 14.8% during the forecast period. The growth of this market is mainly driven by the deployment of urban air mobility aircraft and the increasing use of electric aircraft for cargo applications and different aerial mission-specific activities. 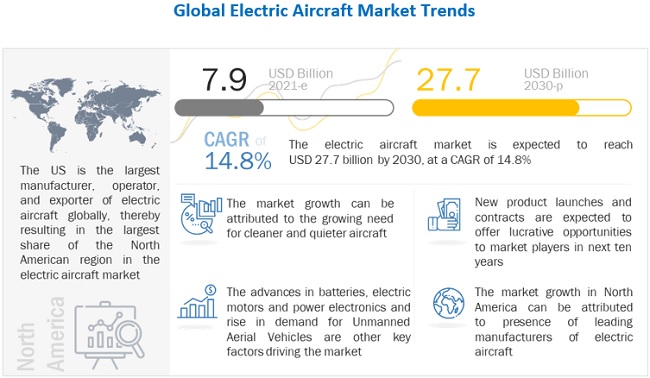 The sudden outbreak of the COVID-19 has taken a toll on various industrial sectors, with aviation being one of the worst affected. However, the electric aircraft market did not seem to have been impacted by the pandemic as much as the aviation industry as a whole. Electric UAVs were widely used by militaries for a variety of missions like border security, while governments and law enforcement agencies used them on an experimental basis.

Civil & commercial applications of electric aircraft include transportation of medical supplies by companies like Zipline and mostly for aerial photography. Retail and other logistics companies are increasingly looking towards the usage of electric UAVs to distribute essential items due to intermittent lockdowns and the imposition of social distancing protocols worldwide. In the US, companies like Amazon and USP have already scaled up their usage of electric drones for their deliveries. Electric drones are also witnessing an increased application in Africa, as they are being used as the art of EMS services to supply medicines and amenities as well as transport organs and blood across cities. These factors have helped the electric aircraft market to sustain the overall impact of the COVID-19 pandemic on the global economy.

Increasing adaptability of the latest technologies by civil and commercial end users is expected to fuel the growth of the light & ultralight aircraft market during the forecast period.

The Hybrid wing segment is projected to witness the highest CAGR during the forecast period.

Based on type, the rotary wing segment is projected to be the highest CAGR rate for the electric aircraft market during the forecast period. The evolution in the missions’ complexity of both military aircraft and unmanned aerial vehicles (UAVs) and the increase in civilian air traffic, with limited runways, will lead to increasing adoption of these wing type.

The battery segment is projected to witness the highest CAGR during the forecast period.

Based on the system, the battery segment is projected to grow at the highest CAGR rate for the electric aircraft market during the forecast period. Batteries are the most common onboard energy storage components of electric aircraft due to their relatively high storage capacity. Modern batteries are mostly rechargeable and are lithium-based. Advancements in battery power density would be the driving factor for this segment

Based on the technology, the VTOL segment is projected to grow at the highest CAGR rate for the aircraft landing gear market during the forecast period. Large deployment in civil applications, including air taxi and ems services, will drive this segment. Most of the civil eVTOL aircraft are designed for urban air mobility, air taxis, medical assistance, and personnel passenger transportation.

Based on application, the Civil segment is projected to grow at the highest CAGR rate for the aircraft landing gear market during the forecast period. As urban planners, public transit agencies, and walking and biking advocates work to steer cities away from a future congested with cars and as others discuss ethics, realities, and regulations of autonomous vehicles, increasing developments in urban mobility applications will drive this segment.

Electric Aircraft market in North America is projected to hold the highest market share during the forecast period. North America accounted for the largest share of 34.3% of the electric aircraft market and is expected to grow at a CAGR of 16.1% during the forecast period. The US has the largest UAV fleet used in military and civil applications. Early adoption of electric aircraft for urban air mobility is also being witnessed in the US. These factors are expected to drive the market in North America.

Our 850 fulltime analyst and SMEs at MarketsandMarkets™ are tracking global high growth markets following the “Growth Engagement Model – GEM”. The GEM aims at proactive collaboration with the clients to identify new opportunities, identify most important customers, write “Attack, avoid and defend” strategies, identify sources of incremental revenues for both the company and its competitors. MarketsandMarkets™ now coming up with 1,500 MicroQuadrants (Positioning top players across leaders, emerging companies, innovators, strategic players) annually in high growth emerging segments. MarketsandMarkets™ is determined to benefit more than 10,000 companies this year for their revenue planning and help them take their innovations/disruptions early to the market by providing them research ahead of the curve.

MarketsandMarkets’s flagship competitive intelligence and market research platform, “Knowledgestore” connects over 200,000 markets and entire value chains for deeper understanding of the unmet insights along with market sizing and forecasts of niche markets.